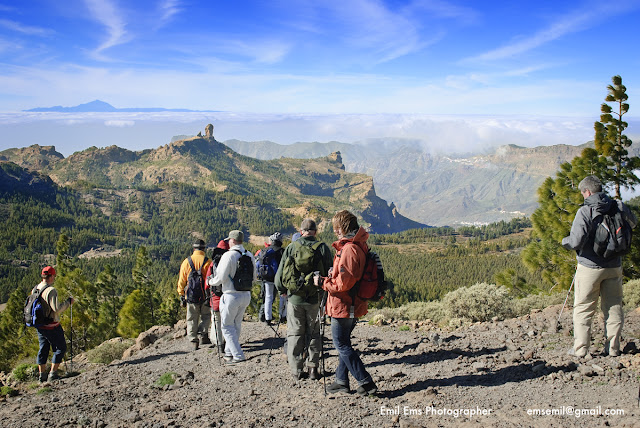 Why am i going to Gran Canaria and why am I writing a blog about it?
The island suits me as well as I seem to suit the island. Thinking about it brings alive a lot of memories, both sad and happy, connected with the many trips I have made to this sunny place.
I visited Gran Canaria for the first time way back in January 1993. The intention was to relax after a craving professional year, spent in the Swedish Central Bank during the Banking Crisis, and regain my spirits after the sadly passing away of my former wife Alice. Unsurprisingly the visit turned out to be a rather melancholic one, passed in a weary mood and contemplations of happier times gone.
To get away from this, I partook in a bus trip across the island to get to know its interior. To my great surprise, the vehicle lifted us from the long sandy beaches way up into lofty heights, so contrasty to the desert like coast, populated as they were with dense green pine forests, protruding cliffs in burning red, blue lakes like pearls on a string and sparkling meadows interspersing it all. I did not realize then that I had been very lucky, witnessing the island after a prolonged period of rain, which had polished nature to utmost splendor. Never again have I seen the interior so beautiful as on that occasion, and the experience helped a lot to lift my depressed moods.
Whilst having lunch in a Parador (Spanish State Hostel) in the middle of the pine forests, I queried the bus driver and hotel personnel about possible hiking paths and tours in the interior. The answer was a total blank. Those were things unheard of by the Spanish operators. I deeply deplored this lack of initiative, had I not longed for polishing off my stay with a couple of days of hiking in this splendid surrounding?
You can understand why I wrote off the island completely after that, since trekking through foreign fields is my favored manner of getting to know the abroad. But ten years later, for one reason or another, I again made a trip to this Southern treasure, in January 2003. The town I stayed in, Playa del Inglès, had remained essentially unchanged, nothing new there. But there was a big change in organizing tours. Although Spanish operators still managed their bus tours as always, a new breed of entrepreneurs had entered the scene: continental youngsters, from Austria, Belgium, Germany and even Sweden had started touring groups that catered for the natural instinct to experience the island through trekking (and biking).
Since then I have been a regular visitor, travelling to Gran Canaria once or twice a year, and criss-crossing the island on foot and bike, until getting familiar with every nook and cranny of its mountainous interior. After about ten visits, it dawned on me that it was time to switch attention to  other foreign places. Still, the old fascination lingered on.
Just after Christmas this year, I got an e-mail from Sandra Mäser, a trusted friend among the continental operators, telling me that there had been a prolonged period of rain on the island and that the island was greener than ever. Could it be that it would be possible to again experience the interior in all its splendor of yore, when I joined the bus tour many years ago? This was an opportunity too good to miss. I immediately booked a flight and, voilà, am on my way!
This answers the first question. As to the second, since I am expecting to see the island as beautiful as it possibly can appear, it is fitting that I should make an attempt to share my experience with my trusted friends all over the world. Let's hope that my expectations are being met and that we can witness, together, some "expeditions" into the interior with reasonable weather conditions, suitable to capture this enticing nature at its best. Let's keep our fingers crossed and hope for the best!
Posted by Emil Ems at 19:55