NOT THE ROQUE AGAIN?? 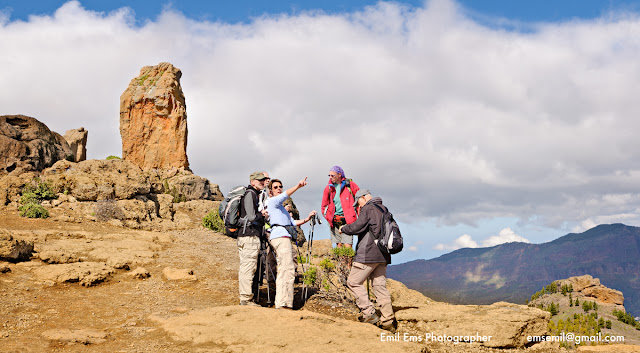 Well, "Yes", here we are again, looking at the enchanting "sugar loaf" of Gran Canaria. How come I happened to climb up to this outpost for a second time within a week?

Yesterday I was hiking with my good old friend José Vanderveken from Happy Hiking/Biking, with whom I have been criss-crossing the island many a time in the past eight years. This time, the plan was to hike in the higher reaches. However, the weather gods did not fully comply with the plan, since it had snowed heavily up there all of the preceding night. When our bus reached the usual staging station in Ayacata yesterday morning, it was not certain that it could proceed to the starting point of José's planned route.

As an aside, snow in the upper reaches, although not unknown, is not precisely common. The residents on the coast of course love snowing and consider this to be a treat to be savoured with abandon. As soon as the roads are opened again, after a heavy snowing, you can witness a caravan of cars queueing their way up to the uppermost parking lot, which happens to be located just below Pico de las Nueves. Rushing out of the cars, the children frolic in the white blanket, throwing snowballs at each other; the grown-ups play their own favorite snow game: each family father, worth his name, is carefully placing a snow man on top of the engine hood just before leaving for back home. Why? Well, there is a competition among the drivers on who manages to keep his snowman the longest, before it is melting completely away, on the way back down to the coast!

But back to our hike! Despite the sordid road conditions, the weather was clearing up rapidly whilst we considered alternatives to the hike José had envisaged. Finally he decided to approach the mountains through a lower road, unencumbered by snow, and have us reach the heights from there. The starting point happened to be the same as the one we already know from Tuesday's hike, and so did the end point. However, this being José, a spritely young fellow, the route we chose was the HARD WAY up to Roque Nublo. Even if this route partly coincided with the Thursday route, I did not complain at all. In fact, for a photographer, there is nothing more proficient than taking a trodden path once again, since it means that you are better prepared for the scenery to catch in your machine. In addition, light conditions are ever changing in those mountains and exactly the same scenery can give rise to completely different pictures, even taken with only a few days in between. 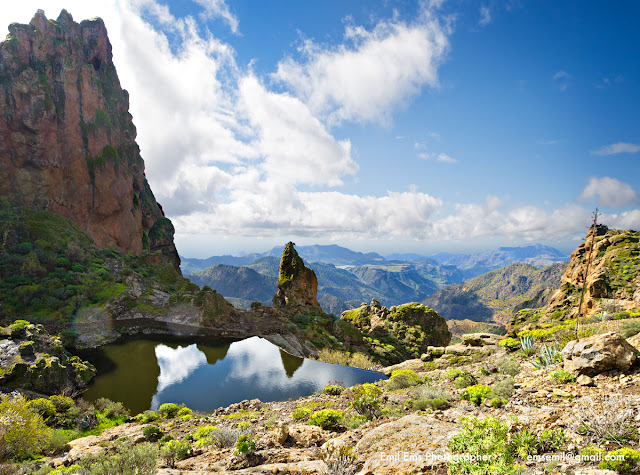 For instance, you may wish to compare the picture above with the corresponding view I presented in my earlier blog post Rocking Roque. Even if looking at the same motive, you tend to be inspired by different angles and contrasts, due to the difference in light conditions; the outcome, in terms of a picture, will be far from identical.

This day I was hiking in splendid company. All members of the group but me were dedicated walkers, who had booked, from Germany, a week full of exercise in this memorable island's interior, rather than wasting their time on the beach. With pleasant chatter and in good humour, up we trampled on narrow paths already described before. One fellow distinguished himself through his never ending tales, which kept us invigorated and encouraged all the way up to the top and down again. Unfortunately, his name escapes me now, but I hope he will make himself known in a comment to this post. You can see him on the picture below, standing just behind José. 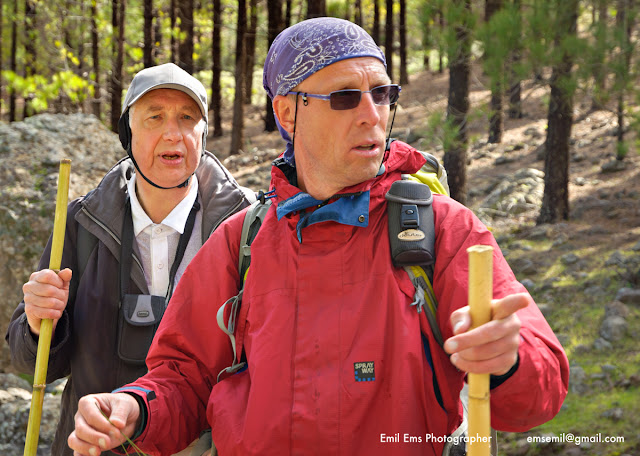 This picture was taken about halfway to the top, at one of the many stops used by José to explain to us the various intricacies of Canarian nature. At this occasion, since we were standing in a pleasant grove of native Canarian pine trees, his explanations centered on their miraculous properties. We of course are already familiar with the way, in which the pines are getting water through "milking" of the clouds. But you may yet wish to hear that they are also very resistant to forest fires. But why should I attempt to explain this to you, if we have José to do it for us, just for the clicking on the video icon below?

At our picnic spot, almost the same as last time, I got again some moments to put my act together to present a panorama for your benefit. As you can see, the clouds had already dispersed after the snowing and a wide view opened up towards the Western coast.

You are complaining again that you cannot see Teide, the by now well known landmark of Teneriffa and the highest mountain of Spain? Well, I cannot help you with that, unfortunately; Teide happens to be hidden behind a cloud, just up from and to the right of the village of Saint Nicholas, which you can glance (barely) on the upper right (just look at the white area close to the sea).

But never fear. The mandatory picture of Teide can be admired yet. José pointed out to me that there was a better spot for viewing it some hundred meters up from our picnic site and I hastened to follow his advice. When I arrived at the outlined location, Teide had chosen to get rid of hiding veils and reappear in royal splendour. You may notice that His Highness' dress looks considerably more snowy than hitherto; I doubt one will ever again be seeing that much white covering on his coat. 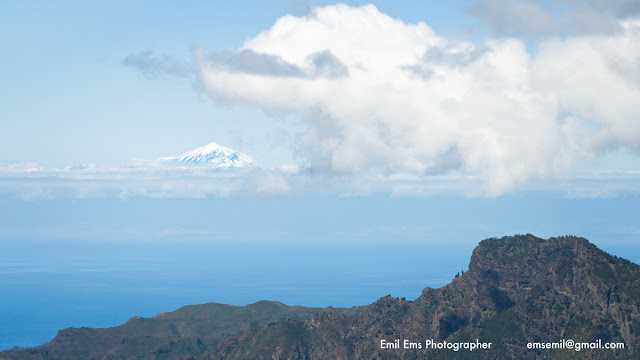 But let's not tally at far away vistas! By now we were already on the narrow path, leading directly to the platform on which Roque is throning, huffing and puffing our way up towards the desired goal. And it turned out that the end result was well worth the effort. Having arrived at the upper plane we could take a deep breath of crystal clear air, still slightly chilly after the night's downpour. But none of the snow that certainly must have blanketed both Roque and his underpinnings was still left for us to frolic in. Only spread-out puddles of water here and there witnessed of a snowfall, all but forgotten in these majestic surroundings. 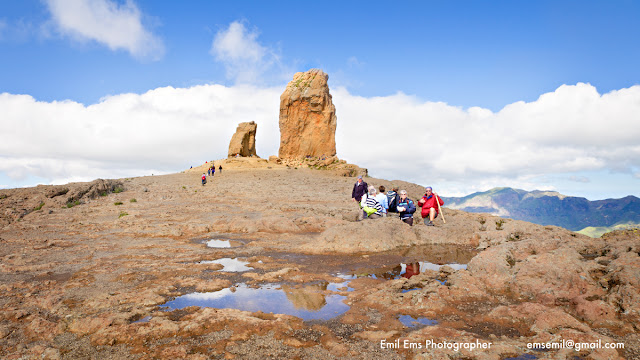 You do not find Roque very impressive, standing, as it does, far in the background? Well, this misconception is easily corrected. In the clear air, the least detail is clearly outlined for the photographer to document and you to appreciate. Does Roque look sufficiently impressive now? 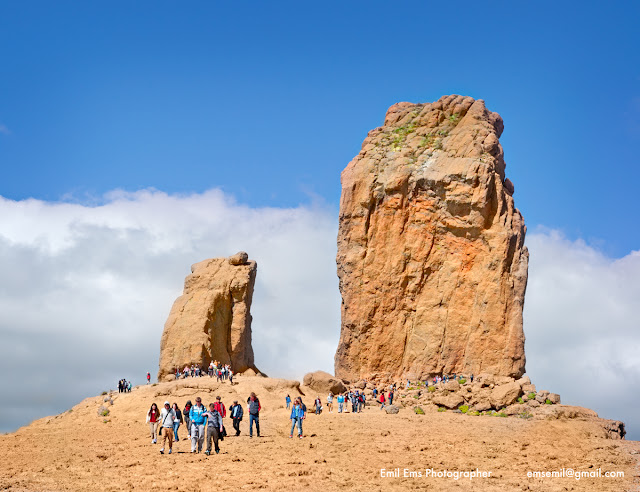 Whilst you are still standing agape before the portentous shape of this prominence, our little group of hikers was already on its way down to the lower plane. And splendid indeed was the descent! Clouds had started to darken the lower platform, but the sun was still blazing on the huge pine forest located on the saddle joining the two calderas. Far in the distance, the two most prominent outgrowths of the Caldera de Tirajana (Pico de las Nuebles and Pico de Campanero) could be glanced in clear detail, their heads shrouded in snow. 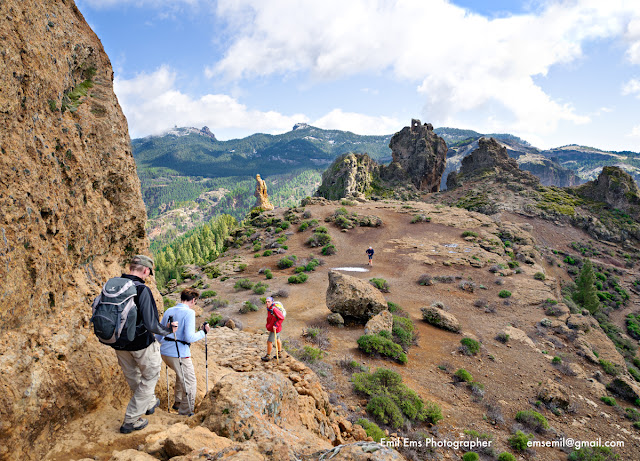 Our heads full of admiration for the amazing vistas we had been confronted with, we continued our descent on the easy way down to the parking lot. After the earlier exercises this appeared to us a "piece of cake". Let me illustrate this by the "letting off steam" shown, by two of our group members, on a small arena just above the parking lot. 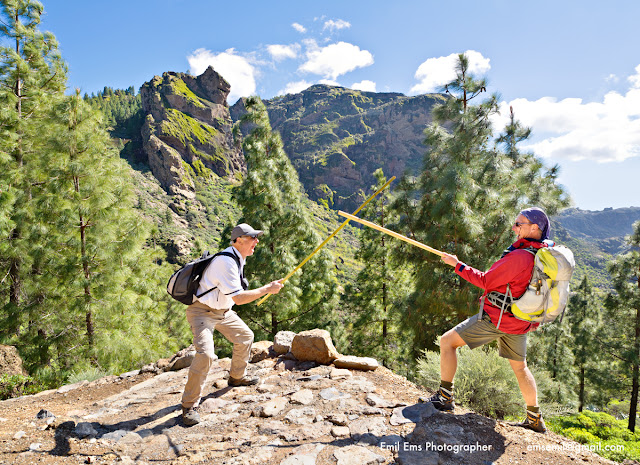 However, it turned out that we had relaxed to soon. José had another treat in store for us. Instead of letting us enter the bus at the parking lot, he suggested, and we followed his advice, that we descend on foot all the way down to Ayacata and its by now well known staging café. This decision led us down a rather steep foot path and treading it became a somewhat laborious exercise, far worse than covering the same slope in the other direction. In fact, I can compare both directions, since I had mounted exactly the same path the week before, that time with Manfred (also from Happy Hiking/Biking) as guide. What appeared then as an easygoing uphill stride, now was a sharp down-hill adventure, demanding every ounce of remaining stamina. 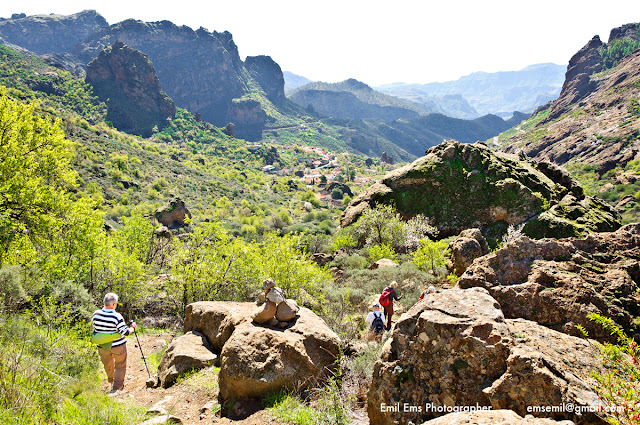 But all's well that ends well! Soon we arrived at our café and could relax and review this marvelous day. Why don't you join us in our review by having a look at the video I have included here for your benefit? In case you are missing the icon I put in here for your convenience (for reasons that escape me, some readers do not receive them) I have also included a traditional link to Youtube, through which you can access the same video.