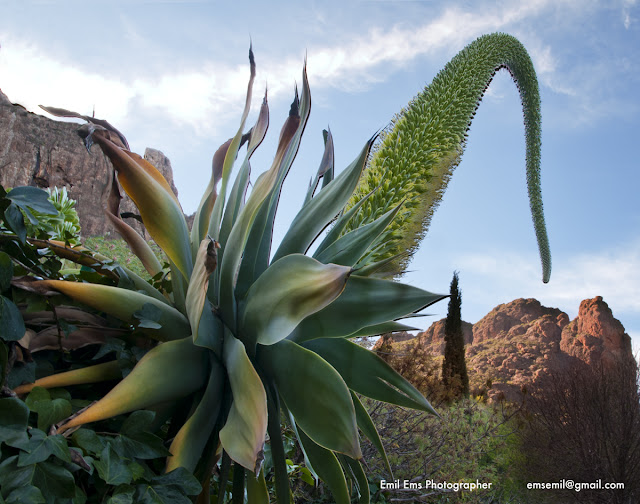 I guess it is the child in me, but every time I see or hear of a mountain, I immediately feel the urge to climb and get on top of it. No wonder, therefore, that I have a particularly strong feeling of satisfaction when reporting about yesterday's exercises. This blog, as well as the next one, is about mountains and how to ascend them.
The mountains on Gran Canaria are not exactly ordinary (but what is ordinary on this enchanted island?). They are not mountains as we usually see them, even if they have the altitude.  To get you to understand what I mean, let’s digress a bit and talk about geology.
The island, as it stands before us now, is formed by and consists essentially of two massive volcanic craters, the Caldera de Tejeda in the Northwest and its southern sibling, the Caldera de Tirajana. Their respective rims are prominent in the island’s center, but their outer parts, towards the Atlantic, are but eroded away. In between the two central rims lies a highland, formed like a saddle and heavily forested by the indigenous Canarian pine. The pine forest is a delight to penetrate and pure pleasure to behold from above.
The Caldera de Tirajana is the younger of the two; but does it matter, speaking in terms of millions of year of age? Consider instead that this crater from the outset was a huge mountain, formed like a volcanic cone and reaching more than 6000 meters into the sky; a bit like the Teide on Teneriffa (the highest mountain in Spain) or the Fujijama, just considerably higher. This massive cone blew up some millions of year ago and left behind it a gigantic crater, the remains of which now still can be beheld as the rim of the Caldera. In a similar manner, the Caldera de Tejeda was formed, albeit millions of year earlier.
The highest mountains in Gran Canaria are really just promontories on the respective inner rims. Roque Nublo dominates the Caldera de Tejeda, whereas the Caldera de Tirajana contains two prominent outcrops, the Pico de Campanario and the Pico de las Nieves. The three have an altitude of, in that order, some 1800, 1980 and 2000 meters. To my regret, only Roque and Campanario are accessible to the public, whereas Las Nieves is off limits, with military establishments close to the peak.


Yesterday’s challenge was to climb the highest accessible mountain among the three, the Campanario. Only one operator in Playa del Inglès is organizing hikes up to its top and that is Free Motion. Our trusted guide was, as before, “Der olle Dieter” who despite his almost 70 years never hesitates to put his foot down on even the most difficult of terrains.
I have to tell you that I have climbed the Campanario already five times before.  However, those climbs were only a limited success. The trade winds regularly cover the Caldera rim with clouds and lucky is the climber who is able to get his reward in terms of sweeping vistas, from the top, of the island all the way to the coast, or even to Teneriffa, with Tejde reigning like a sovereign over the clouds . Only once before did Fortuna favour me, even only with limited views, and I was hoping for even better luck this time.
There is an easy way and a hard way to climb Campanario. Until recently, the guides have always chosen the hard way, which means climbing the peak from the inside of the Caldera. This involves daring a rather narrow path cut into steep slope and overcoming a difference of some 1000 meters in altitude. This year, Dieter decided otherwise; had age started to sneak up to him? Probably not, he is still spritely as a youngster and it takes some stamina to follow his strides. Maybe it is us customers that have become older and less willing to endure the hardship of the “narrow path”.
Be that as it may, the route we took this time started from the dense pine forest of the high inland plateau. From there, you only have to overcome a limited difference in altitude, some three hundred meters, and the slope is correspondingly milder. 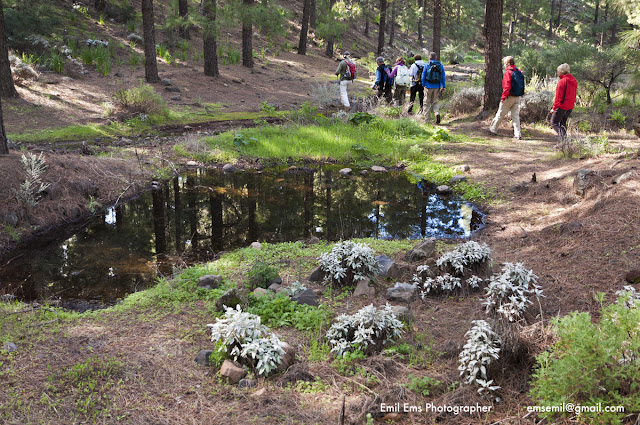 Our hike started in a glade, where the Spaniards living on the island usually have their picnic in summertime, looking for a refreshing reprieve from the coastal heat.  From the start, an easy-going camaraderie developed among us fellow hikers, all eager to gain the top of the world and admire it from there. Let me single out one of those newly won friends: his name was Ehrling. The interesting thing about him was that he, although being a Swede, spoke Austrian almost as well as I speak Swedish (Let others judge how “well” that actually may be). This was a funny guy indeed, in a discrete Swedish manner; furthermore, he was as eager a photographer as myself. 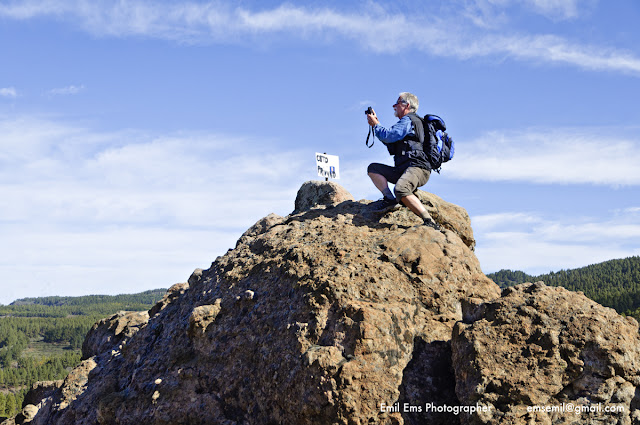 Soon we happened upon a comfortable path with an intriguing sign that said “Camino de Santiago”. Could there be a connection to the many roads leading to Santiago de Compostella in Spain? Indeed there could and was, as explained by Dieter. This path is crossing the island from South to North, through barrancos and over the tops, its purpose being to lead pilgrims from the South to Las Palmas in the North, to be shipped onwards from there to the corresponding paths in mainland Spain.
After an hour’s comfortable walk as pilgrims, so to speak, suddenly there came our first big surprise of the climb: a clearing opened up in the forest and allowed us an unhindered vista over the western part of the island; and, surprise, surprise, above it all, like a mirage, appeared the white capped crown of Teide. 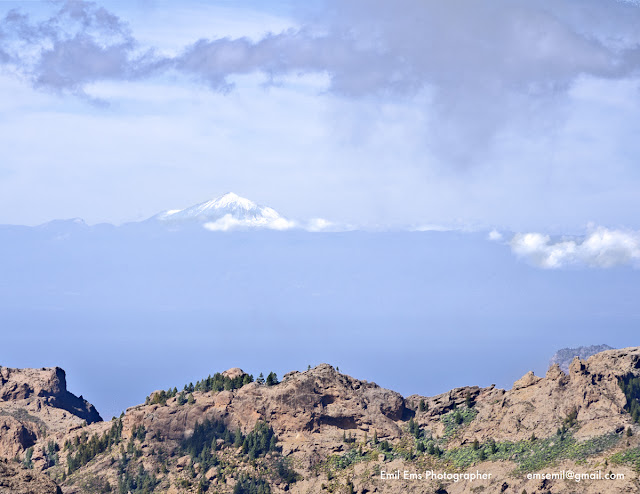 With cameras clicking away and happy outbursts waking up the birds, we got new stamina necessary for the other half of the climb. We had now to leave the comfort of the pilgrim track and to continue upwards along a narrow, but still passable footpath.
As we proceeded towards the top, again and again vistas of the Tejde and, increasingly, of Roque Nublo opened up among the pines, keeping us content and eager to continue. At one nice spot, Dieter stopped us and pointed to his favourite view of Roque, framed by pine trees like by a window. You can see for yourself below if this view is worth looking at. 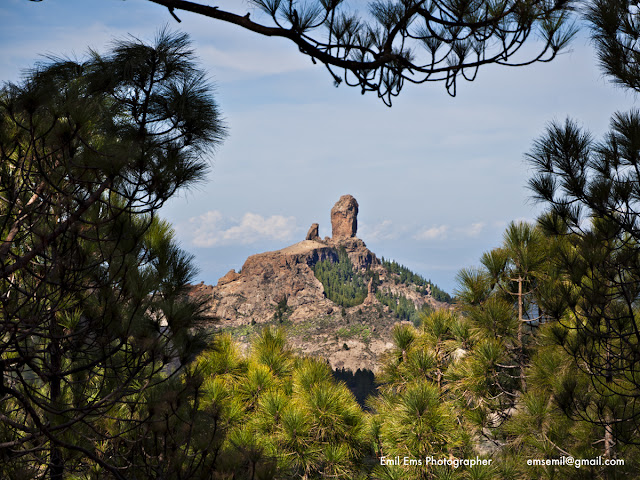 These pleasant interruptions were the more welcome than the air had become quite cool and the path was getting increasingly icy. But nothing could prevent us now from pressing ahead, all of us looking forward to experience a marvellous view from the top.
And finally, there we were, standing on top of the world, or at least the island! 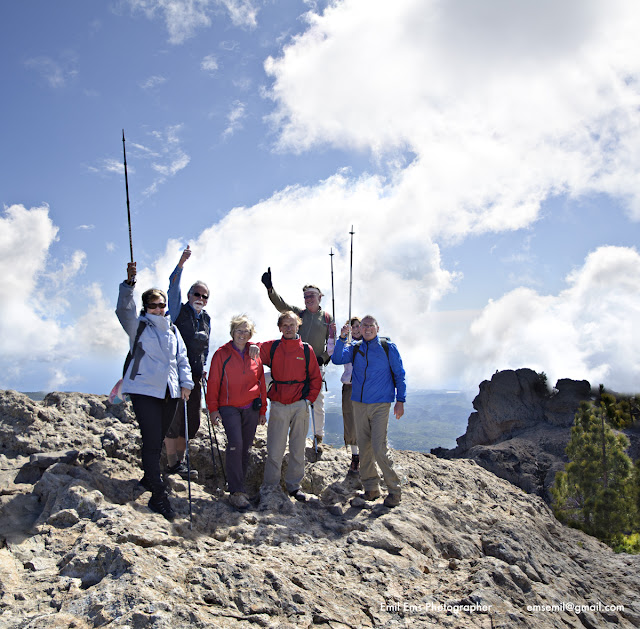 What did it matter that cold winds were chilling our cheeks! Did they not help us keep the air clear from clouds and providing us with unhindered vistas, from looking down to the dunes of Maspalomas to looking up at the majestic serenity of Tejde, accompanied by its sibling, the reddish Nublo. All too short was the time spent on this marvellous look-out; eventually, we had to leave with regret, but the memory of these sunny views will linger on and comfort us in bleaker days to come. 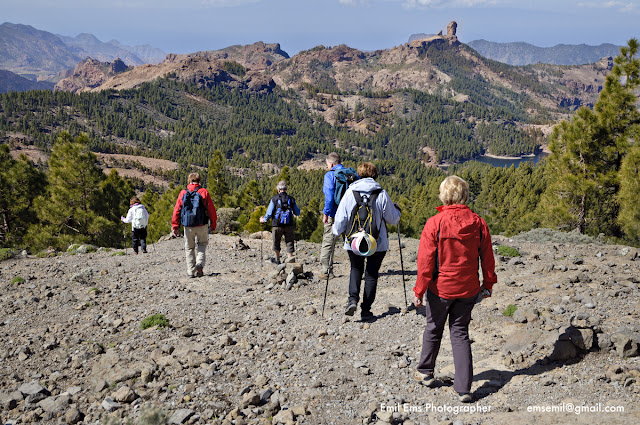 Back down we strolled, through the pine forests, to the picnic site where our bus was already waiting for us. Following Dieter’s knowing instructions, it rushed us to the cafeteria La Candelilla, in Ayacata, the starting and finishing point of many a hiking trip. Refreshments were in order!
Whilst sitting at that café and sipping coffee, I suddenly remembered that Dieter always feels the urge to point out an intriguing mountain range just opposite the café and mention that it looks like a snoring giant. Have a look at the picture I took for your benefit and let me know, whether his interpretation makes sense to you. 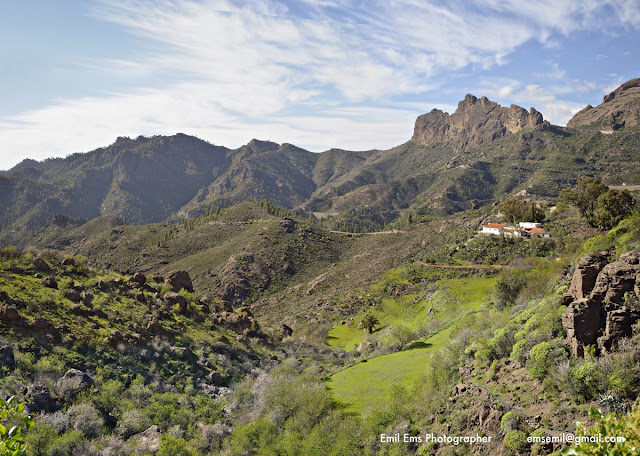 Whilst you are pondering this important issue, I’d like to reacquaint you with Ehrling, who kept us awake, during the hardy hike, with and laughing at his funky stories. Please have a go at the web address below, to hear him tell the story of how he tried to convince his Austrian friends of the delicate taste of Surströmmning (Swedish style sour herring).

You could not follow his tale, because your German was getting rusty? Do not despair: just click on the next address here, to hear Erling invigorating us with a beautiful song in Swedish.

Are you disappointed with the scarcity of pictures I have put in this blog? Well, there is a remedy also for this sad feeling. Here comes now the usual rounding up of the story, in form of a full picture gallery, with music and all, depicting the full story of this marvellous day! As a special treat for you readers, the pictures are being accompanied by the most glorious trumpet solo ever played. It brings tears to the eyes even to the most scarred veterans among us. It is amazing that a 25 old artist could express so fully what us old-timers feel and fear. A most suitable companion to a unique hike to the top!