OF WATERS AND WITCHES

On an island with an arid, desert-like South, like Gran Canaria, access to water is of utmost importance. In the old days, it was an issue of life and death. People did not use to live along the southern slopes, since rain was rare and stochastic and there was a dearth of springs. First higher up in the arroyos (canyons created through erosion of the huge southern vulcanic crater rim) could people survive, where springs created tiny oases of greenery in the middle of arid wastes. Still, there were periods of extended drought in pre-modern times, often lasting for a decade or more, forcing also those people to leave and emigrate, mostly towards Latin America, and coming back first when living conditions again proved more favorable.
All this changed when Franco, who used to be governor of the Canaries, commanded the systematic construction of reservoirs in the interior, together with tunnels and open conduits to lead the water south. To this day one can observe, on any slope close to Maspalomas, the open irrigation ditches that led water to huge tomato plantations and were still in function until about fourty years ago, when the tourist trade took over. The name of Maspalomas is indirectly related to this. The immense tomato cultivations gave rise to a lot of waste which was loved by pigeons. The workers in the plantations, being plagued by these insistent birds, would exclaim "Yet more pigeons!" (in Spanish "Mas palomas!").
The open ditches are left to decay nowadays and agriculture has been intensified instead in the southern arroyos and highlands. Water to the fields is nowadays led through huge black closed tubes that snake along the slopes, avoiding the large evaporation losses of the former open conduits.
There are as much as some 60 reservoirs on the island, providing a sustainable water supply for agriculture even over a prolonged period of drought. Filled to the brim with the precious fluid, they could keep the southern fields going for almost ten years of sparse raining before needing replenishment. This is precisely what is needed, since plentiful rain comes only between long periods of dearth.
But what about the tourist industry with its many thousands of visitors? Does it not use up all the water in the reservoirs in gigantic slurps, leaving only pittance to the farmers? Actually, all residential use of water on the coast is being supplied by huge de-salting plants that convert seawater to freshwater. This water is not potable. Drinking water comes instead in plastic bottles and consists of water from wells in the North. Up there, there is always ample supply of water, due to the humidity carried to it by the trade winds and unleashed over its slopes. This leaves the reservoirs to be used by the southern farmers and highland communities. All in all, the water supply system appears pretty much sustainable. 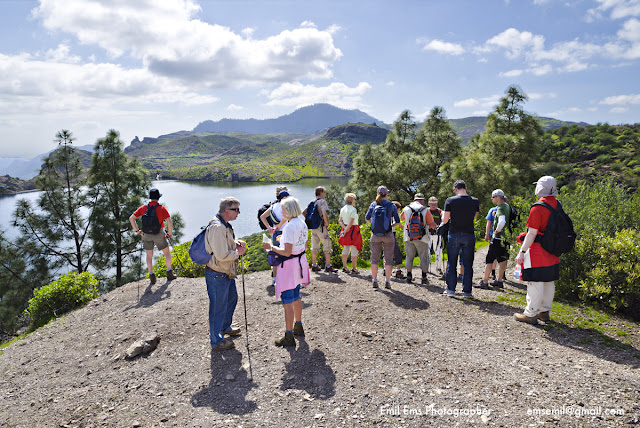 Due to the heavy rain earlier this year, and also last year, the reservoirs are completely full; and nature,  on the southern coast and highlands, is as green as never before. Does it surprise you that I am longing for excursions into this region of bounty? Yesterday, I partook in a nice Lake Hiking Tour, organised by Free Motion, to get a closer look at the major reservoirs. The guide was an experienced gentleman of relatively mature age, commonly called "Der olle Dieter". He proved to be a most agreeable and experienced fellow, having lived on the island for more than twenty years and knowing pretty much everything there is to know about the history and nature of this enchanted place.
The hike started at Embalse (Reservoir) de la Soria, the large lake on the lower southern slopes. As already said, it was filled to the brim. Watching its full length from the heights was pure pleasure. Just have a look at the title picture of this post! After having savored this watery vista, the real hike started and went ever upwards, along a broad and easily treaded farming road that reached onwards in broad swiping serpentines. Initially we passed through a light pine forests, interrupted by deep gorges and stony slopes created by the recent, or earlier, heavy downpours. 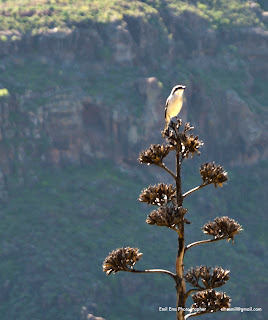 Eventually we gained more open heights, with broad vistas over the surrounding mountains. As a pleasant interruption, Dieter pointed out a rare bird that I did not hesitate to document for your benefit. Unfortunately I keep forgetting its name, so I will have to fill it in here later after having relearned its name from Dieter. Or maybe Dieter could help me out by putting it into a comment to this blog.
One of the highlights of the hike came at picnic time. Don't misunderstand me now, I don't mean the food, although we were quite hungry by then. It was the place we chose for our resting! It was a small round glade, green with grass, and known only to local people and of course Dieter; peacefully it stretched out, surrounded by reddish volcanic boulders, just waiting to be enjoyed by us during our resting period. Along one side of it, an intriguing configuration of stones could be admired, not unlike the labyrinths adorning the floor of old Gothic churches and small parks preserved from yore. 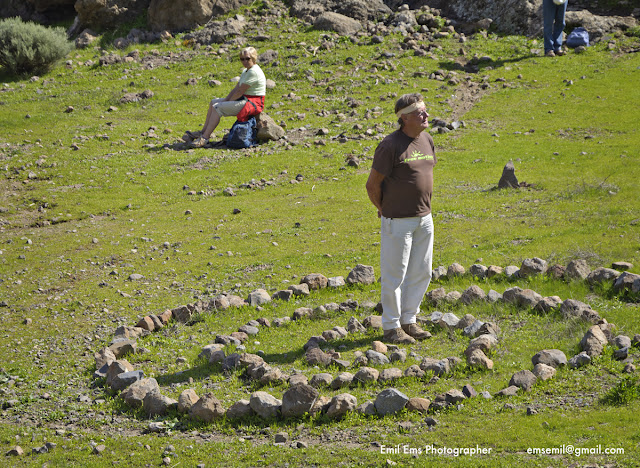 Of course we were eager to learn its raison d'être. It proved an interesting story, involving women of a certain age, engaged in healthy meditation aided by this quasi-heathen configuration of stones. But why should I tell you the details, since we have Dieter himself ready to do it for you readers. Clicking on the video below will bring him alive for us:

Reinvigorated by food and tales, on we went on our hike, towards the second lake on our journey, the Embalse de la Cueva de las Ninyas. Just before arriving at this jewel of a lake, we passed by a well known goat farm, located rather conveniently up on the heights, where food for the hardy animals can be found in all seasons, wet or dry. This year the goats do not have to stray afar for food, in this mountain world of lush greenery. Happy be those that will be buying goat cheese from this farm a year or two from now; this will be a rare delicacy, once it has fully ripened. 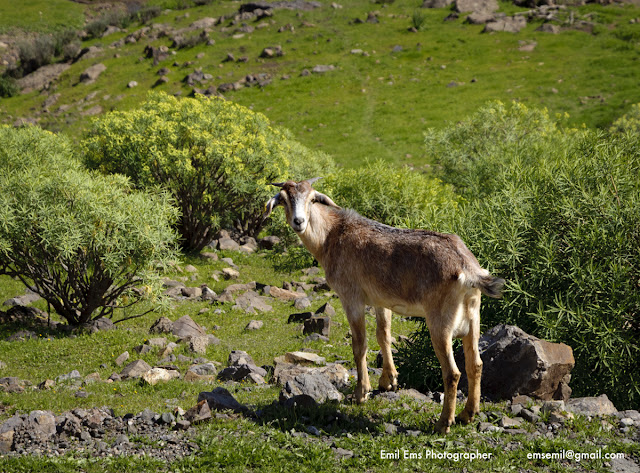 But on to Las Ninyas!
Our hike led us along the full length of this lake. It has a very nice picnic and camping area, which we made a quick detour down to the shore to investigate; the reward was glittering waves on green shores. At a spot almost at the farther other end of the lake it suddenly occurred to me that I had stood there before and taken a picture. This was two years ago, when the reservoir had almost dried up (it did so the year after). It may interest you to have a look at the situation "before and after". It really lets you appreciate the rain from the last few weeks, doesn't it! What a difference a bit of rain makes.

Whilst we contemplate this difference, let me finish this rather lengthy blog with a picture you may not see again soon. It is a 180 degrees' panorama of Lake Ninyas. Not the best of photographs, by all means, but it shows the whole lake at once and I am quite proud of having gotten my act together on this one.

I have the feeling that you would like to see the full set of pictures from this pleasant hike. So, here you have the full gallery, with music and all, yours for clicking with your mouse: